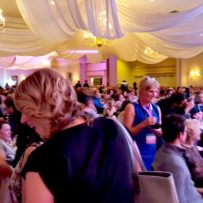 RUNWAY to WATERWAY Fashion Show Gala was held on Thurs. September 29th at Michelangelo Banquet Centre. The Fashion Show was fun and inspirational and featured the ladies of Knot A Breast – Breast Cancer Dragon Boat Team, who sashayed in style down the runway in Designer Fashions provided by “The Oyster” of Burlington. What were they wearing? … Cambio, Elisa Cavaletti, Greenstone, Georges Rech, Luisa Cerano, Marc Cain, Obakki, and more!

Television personality, Connie Smith, MC’d the Evening with her usual positive and fun aura, which also included three Hamilton Ti-Cat football players who modelled fashions from Scrivener’s Men’s Apparel of Burlington. Janine Parkinson (a Cancer Survivor who was also a danceScape student in Salsa) did a fierce Martial Arts demonstration, and danceScape’s Beverley Cayton-Tang showcased an Oyster design and danced the Viennese Waltz with Robert Tang down the runway. Thanks so much to Kathy Christie MacFarlane and the staff at Oyster for all their hard work in organizing the show, and to the Dragon Boat Team and organizing committee and volunteers for an outstanding success on their first event!

The Mission of the Knot A Breast Dragon Boat Team is to show women and men that they can lead full and active lives after treatment for breast cancer. The team held its first meeting at the Breast Cancer Support Services office in Burlington, Ontario in 1998. Starting with a small group of breast cancer survivors, Kathy Levy, (also a survivor) formed the Knot A Breast dragon boat team in the fall of 1997. Age, athletic ability and paddling experience did not matter. The team was comprised solely of women ranging in age from 30 to 65. The only criterion to membership on this unique team was that a person had a diagnosis of breast cancer. As the sport of dragon boat racing grew, Knot A Breast became a top competitor in the Breast Cancer Division. Traveling to local, national and international venues, the team works to promote athleticism and sportsmanship at its best. In 2010, the team traveled to Peterborough, ON to compete in the International Breast Cancer Participatory Festival, where they placed first overall. With much hard work and determination, they successfully defended the title in Sarasota, FL in October 2014. The next IBCPC will be hosted in Florence, Italy in 2018. Knot A Breast will be attending in the hopes of defending their previous wins. #whatwillbeverleywear

To support FREE Facebook LIVE classes for Adults, Seniors, Youth/Teens & Children with Health Challenges, click on the “Patreon” button and select a Membership Support Level, from US $5.97/month.

Donate to “The danceScape Endowment Fund”

Please click on the "Donate Now" button, and then select "The danceScape Endowment Fund" from the drop-down list of Operating Funds. Our goal is $25,000 to be a self-sustaining fund.