Home » Blog » danceTONE Free Class at “Fit in the Core”

danceTONE Free Class at “Fit in the Core” 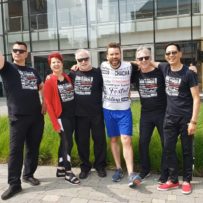 Join the Men of danceScape on CHCH Television’s “Morning Live” 6 to 10 a.m. WEDNESDAY morning (July 10th). Tune in to a fun segment with TV host, Tim Bolen as he speaks to Beverley about “Fit in the Core” with danceScape this Sunday, July 14th for a fun morning danceTONE/danceFLOW fitness workout in front of the Burlington Performing Arts Centre (Locust at Elgin Street).

Inviting Dads/Grand-Dads to bring their daughters/sons/grand-children, spouses for a fun morning workout learning to Rumba, Cha Cha, Salsa, Merengue as well as some fun “magic mike” moves that can be used at weddings and other social dance events. Or wives/spouses and daugthers/grand-daughters, bring your dad or grand-dad for fun surprise. Light fitness gear and come down for some fun, fitness and friendship.

Thanks so much to Tim & France from CHCH Television, Samantha from Burlington Downtown, as well as the Men of danceScape … Ralph, Garry, Malcolm, Robert with Beverley Cayton-Tang. And groupie/roadie spouses, Martha & Brenda!

ABOUT FIT IN THE CORE
Join us for Open Air Fitness every Sunday in Downtown Burlington — free of charge. Something different every week. All you need to bring is a mat & water bottle! (This event will be canceled in the event of rain. Please stay tuned to social media @DTBurlingtonOn (Twitter, Facebook & Instagram) for cancellation announcements in addition to this webpage.)

Donate to “The danceScape Endowment Fund”

Please click on the "Donate Now" button, and then select "The danceScape Endowment Fund" from the drop-down list of Operating Funds. Our goal is $25,000 to be a self-sustaining fund.